Both do pretty much the same thing: checking whether 2 enum values are the same. And if you search your code base, you probably find both kinds. There are some subtle differences. What are they - and which syntax should I use?

Enum values are guaranteed singletons - and thus the == reference comparison is safe. The enum itself just delegates to Object.equals(), which does exactly that. 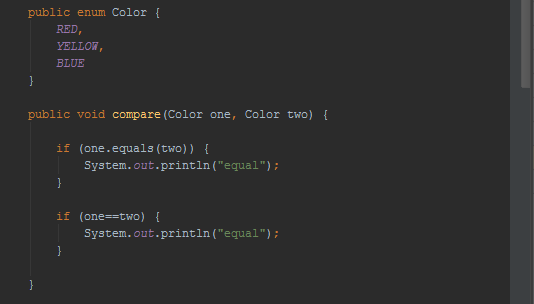 So if they execute the same code, why should I bother?

I produced a bug which broke the build. Luckily we did have a unit test in place that caught it. But still I would have seen it earlier, had I used the "correct" syntax.

So which one is it?

It provides compile-time safety. While MyColor.BLACK.equals(acceptsAnything)gives a warning at most, the check MyColor.BLACK == something won't even compile if something is not an instance of MyColor. 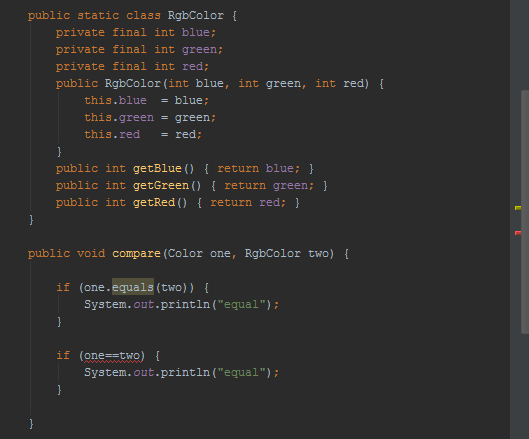 This makes it refactoring-safe. If you go - like me - and change the type of something later on, you'll notice instantly.

Another difference is the support for null. The check with == allows null on both sides. It doesn't throw, however, it may also "hide" a null value where there shouldn't be one.
The check with equals() allows null only on the right side, and throws a NullPointerException if the left side is null. That may be desired sometimes. Anyway, I vote for not letting null slip into this comparison at all. It should be checked/handled before, instead of being smart. (See my article about null handling.)
So the comparison with == is "safer" also at run-time in that it never throws a NPE, but is possibly hiding a bug when the left side should never have been null.

Then there's the argument of performance. It's irrelevant. I'm not going there.

And the visual aspect. Which one looks nicer?
When I can have compile-time safety, I don't care about the looks. I was used to .equals() simply because that's how Strings are compared. But in retrospect that's a pretty lame explanation.
On this StackOverflow question, which is exactly about the topic,  Kevin Bourrillion from Guava commented that "== may appear incorrect to the reader until he looks at the types" and concludes that "In that sense, it's less distracting to read ".equals()". Au contraire! When I see CONSTANTS around == I instantly know they're either enums, or primitives, of matching types. If not, the code is either red because it doesn't compile, or with a yellow warning from my intelligent IDE saying that .equals() should be used. For example Strings or primitive wrappers like Integer.

After that incident at the company we've decided to go with reference equality comparison ==.